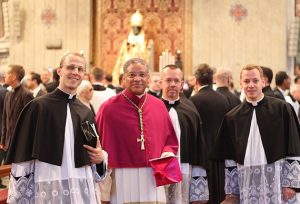 The Office of Multicultural Diversity

invites you to the annual

Bishop Joseph N. Perry,
Auxiliary Bishop of the Archdiocese of Chicago, Vicar General,
Vice President of the National Black Catholic Congress &
Postulator of the Cause for Fr. Augustus Tolton

Along with Concelebrating Bishops & Priests

Bishop Joseph Perry was appointed, during the pontificate of His Holiness, Pope John Paul II, Titular Bishop of Lead (an historic former See in South Dakota) and Auxiliary to his Eminence, Francis Cardinal George, OMI, Archbishop of Chicago, on May 5, 1998, His Episcopal consecration took place June 29, 1998, the feast of Sts. Peter and Paul, at Chicago’s Holy Name Cathedral.  His duties, currently, see him as Episcopal Vicar for one of six Vicariates of the Archdiocese of Chicago, a jurisdiction that covers currently 70 parishes, 27 parochial schools, 2 Missions and an Oratory.