The Spiritual Benefits of Technology in a Time of Crisis 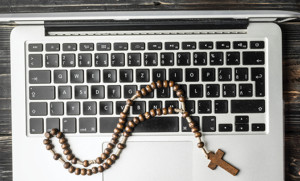 “Gather ’round the TV, kids, it’s time to pray.” Those are words I never thought I would utter as a Catholic media studies professor who has spent the past 20 years studying the effects of media on children and families.

And yet, for the past few weeks during the coronavirus quarantine, I have found myself saying those words every day at noon as we gather to “attend” Mass at a church in England that offers a daily livestream. The experience has forced me to reevaluate our relationship with media technology as a Catholic family in a time of crisis.

As a kid, I can remember watching Mass on television during a particularly bad snowstorm in Pittsburgh, where I grew up. It was a little unsettling, but it also sent a powerful message. To this day, I still tell my parents that watching Mass on 1V in that snowstorm left more of an impression on me than anything I learned in catechism class. It showed that my parents put such a high value on witnessing the holy sacrifice of the Mass on Sundays that we weren’t going to miss it, even if it meant watching it on 1V.

Shouldn’t the opposite be true? Didn’t watching Mass on 1V cheapen the experience by hollowing out its embodied and sacramental character? Under normal circumstances, perhaps. If we could travel to Mass safely, there was no reason to watch on 1V. But then there’s the story of St. Clare of Assisi who, when she was too ill to attend Mass, was granted a vision of the liturgy that was projected onto the wall of her room. It’s why St. Clare is now the patron saint of television. All of this came into particular focus on Friday, March 27, 2020, when Pope Francis delivered an “urbi et orbi” extraordinary blessing to an empty St. Peter’s Square. Unable to attend because of the pandemic, the faithful were invited by the Holy Father “to participate spiritually through the means of communication.”

We watched as a family as Pope Francis ascended the stairs of St. Peter’s alone in the rain as evening descended on the empty streets of Rome. The images were stark and arresting. There was a sad beauty in the emptiness.

The thought of praying with the pope and the rest of the world while adoring the Blessed Sacrament was a consoling reminder that God’s love and mercy is not confined to any particular place. The televised experience provided a fitting analogy for God’s ability to transcend the temporal and physical constraints of this world to unite the church through spiritual communion.

There is a very good case to be made about the corrosive effects of television that have accumulated over the past half-century. But our recent need to see and hear the prayer of the church while being separated from it has attenuated those effects for the moment. For now, as our television culture gives way to a digital culture that has yet to reveal its own lasting effects, the 1V is providing a spiritual lifeline to the church that has been physically separated but remains spiritually intact.