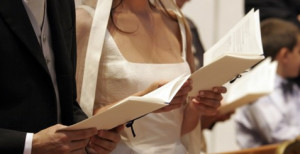 On November 12, 2013, the U.S. Bishops approved two documents with far reaching effects for the Sacrament of Marriage:

Following the Second Vatican Council (1962-65), the Church published a revised Order of Celebrating Matrimony (in Latin) in 1969 and the official English translation was published in 1970.  In 1991, a revised version of this Order of Matrimony was published (in Latin), but the English translation was delayed for various reasons until now.  In summer 2015, Rome gave its required approval to the work voted on by the U.S. Bishops. Available for purchase on August 25, 2016, the new Order can be used as of September 8, 2016 and must be used as of December 30, 2016 and after.

What’s New in the Second Edition?

What are new U.S. adaptations

The Holy See approved certain adaptations to the Order of Celebrating Marriage for use in the United States. One of them is already in the current Rite:

Two other adaptations are new:

Blessing and Giving of the Arras (Coins)

These adaptations—important for Hispanic and Filipino cultures—have already been approved for use in the United States in Spanish since 2010.  Making them available in English translation is intended for occasions when one of the spouses has this cultural background but the other does not speak Spanish, or where both couples have this cultural background, but have become more accustomed to English than Spanish.

The word arras literally means “pledge.”  Usually, the arrasconsists of a small cask containing thirteen gilded or plated coins symbolizing prosperity.  The formula which both bride and groom say to each other during the exchange of the arrashighlights their commitment to share together all the goods which they will receive during their married life.

Blessing and Placing of the Lazo or Veil

The lazo is a type of lasso or yoke to symbolize the marriage union.  Its most usual form is a double-looped rosary; one loop goes over the groom’s shoulders and the other over the bride’s with the cross hanging between them.  The two are now tied together for life, so to speak.  To use the biblical expression, they become “one flesh.”

The veil seems to have had its origins as a symbol of both a dying to one’s past self (like a funeral pall) and as a protection from danger (like a cloak or protective covering).  While the woman wears the veil, it is placed over the shoulder of the man and oftentimes the lazo helps to hold it in place.  It is usually placed just before the Nuptial Blessing, since the Nuptial Blessing, symbolized by the veil, is the “protection” which the Church offers the newly married couple.

About the author: Fr. Dan Merz has been a priest of the Diocese of Jefferson City, Missouri since 1998.

Don’t Let the Winter Blues Get You Down

Prayer for the New Year

Carrying Christmas Into the New Year

The Feast of the Holy Family of Jesus, Mary and Joseph