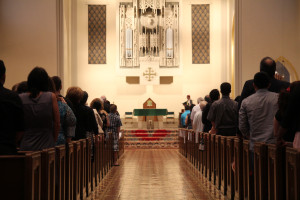 by Fr. Larry Rice
This Lent, in many Catholic parishes, you may see people preparing for Baptism and initiation into the Church. These people, called catechumens, are on a journey of spiritual growth. The Rite of Christian Initiation for Adults is the formal process that guides that journey, and during Lent, there are particular markers along that road.
On some of the Sundays of Lent, the catechumens are presented with the Lord’s Prayer and the Creed. They are also asked to publicly give witness to their desire for full communion with the Church, through rites that have the somewhat intimidating name of “scrutinies.” These scrutinies usually happen at a Sunday Mass in front of the assembled congregation.
It may seem odd, but the catechumens are usually dismissed from the Mass after the homily. Since they don’t yet participate in the celebration of the Eucharist, they are dismissed to study the Word of God and to continue their preparation for Baptism and initiation.
In most places, the catechumens will be received into the Church during the Easter Vigil. Because they are becoming Catholic as adults, they generally receive all of the Sacraments of Initiation at once: they are baptized, confirmed, and receive their first Eucharist at the Easter Vigil.
Through this process, people are welcomed into the community of believers, and the Church itself is renewed.
Fr. Rice is vocations director for the Paulist Fathers.