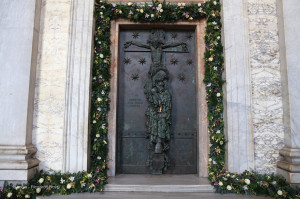 The Jubilee of Mercy was announced by Pope Francis as a year to be lived intensely in each particular Church, allowing every person to encounter the mercy of God the Father through diligent labor for the Church’s mission there. The most evident sign of this pastoral care is the chance to open a Door of Mercy in every diocese. These doors, analogous to the Holy Doors of the Papal Basilicas in Rome, will permit even people who cannot travel to Rome to make a Jubilee pilgrimage.

As we continue through this Year of Mercy below are some resources that will allow you to reflect God’s mercy everyday.

Our Sunday Visitor (OSV) and the National Conference for Catechetical Leadership (NCCL) are working together to offer catechetical leaders tools for personal professional development and for assisting others in ongoing adult faith formation during the Extraordinary Jubilee of Mercy. The tools build on the

Pastoral Resources for Living the Jubilee Year of Mercy series of books promulgated by the Pontifical Council for the Promotion of the New Evangelization as the official catechetical resources for the jubilee.

Visit the specially designed webpage to learn more about all the resources that are available, including a discount on the books, an app, a coordinator manual, and webinars.

Thirsting for Water in the Year of Mercy

Countless sad stories can be told about the great numbers of people in large parts of the contemporary world who thirst anxiously for safe water to drink.
In other parts of the world where a decent supply of drinking water is taken almost for granted, it can be hard to fathom these stories. Is there still a need for the corporal work of mercy that calls for giving drink to the thirsty? Really?
The truth about the thirst for water in the twenty-first century strikes a sensitive nerve in the Christian community, where tradition honors water as a powerful sign of goodness and life.
It always is remembered among Christians that Jesus asked the woman at the well in Samaria to give him a drink and proceeded to tell her that whoever “drinks the water I shall give will never thirst” again (Jn 4:7; 14). Read more

Mercy Fridays with Pope Francis from Pontifical Council for the Promotion of New Evangelization, Vatican State.

After opening  the Holy Door at the Hostel Don Luigi Di Liegro at Termini, Pope Francis continues to bear witness with concrete signs of Mercy.

Today, at 4:00p.m., he passed through the door of the retirement home Bruno Buozzi in the popular district of Torrespaccata to meet about 30 seniors hosted in the house.

This unexpected visit surprised everyone and proved how important Pope Francis’s words against the “culture of the rejection” are, and the big value that elderly people and grandparents have in the Church and in the society.

The Pope continued his visit to Casa Iride, the only non-hospital Center in Europe that hosts 7 people in a vegetative state, along withtheir relatives taking care of them.

This so deeply human symbol carried out by Pope Francis is another demonstration of the great value of human life and of the dignity with which it must be respected. View Photo Gallery

Merciful like the Father: message for the Jubilee of Mercy for the young

Vatican City, 14 January 2016 (VIS) – Pope Francis’ message for the Jubilee of Mercy for young boys and girls was published today. In the text, dated 6 January 2016, Solemnity of the Epiphany, the Holy Father addresses young boys and girls aged 13 to 16, many of whom intend to make a pilgrimage to Rome from 23 to 25 April, and who are “preparing to be Christians capable of making courageous choices and decisions, in order to build daily, even through little things, a world of peace”, and encourages those who live in difficult situations not to lose hope as the Lord “has a great dream” for them that He wishes to come true. He invites them not to be “taken in by the messages of hatred or terror all around us”, and instead to make new friendships. Read More

Mercy will be opened. There should be a Door of Mercy opened in every diocese and eparchy of the world (cfr. MV 3).

In addition to the Door of Mercy chosen for the diocese, the diocesan Ordinaries may also permit the

opening of other Doors of Mercy at Shrines of particular importance, especially where there is the happy possibility that the many faithful who visit the shrine may always encounter the merciful embrace of the Father in confession (cfr. MV 3).

It is good for the extraordinary possibility for the Jubilee indulgence to be recognized by the faithful precisely as an opportunity out of the ordinary, so that they may live it as a time particularly fitting for embarking on the path of conversion. Fostering the proper appreciation for the special sign of the Door of Mercy will facilitate this invitation to conversion. Read More

Vessels of Mercy
a prayer for the Year of Mercy

God of Mercy,
As you have forgiven us
So you send us forth
To bear your message of mercy to all.
Give us willing feet and gentle hands.
Bless us with listening ears and searching eyes.
Endow us with understanding minds.
Ordain us with compassionate hearts.
In our acts and in our words
Make us vessels of your mercy
To reach out to the broken
On behalf of the father who wipes away our debts
As lovingly as he wipes away our tears
And calls his children home.
Help us lift your people in body and spirit.
And so make every year a year of mercy.