Why the Church Does Not Endorse So-Called Same-Sex “Marriage” 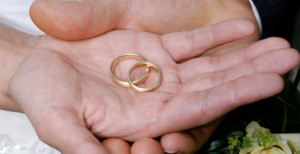 As the catechesis Love is Our Mission points out, the truth about marriage has been obscured in our culture so much so that it is barely recognizable. As contraception, sterilization, abortion and divorce have become socially accepted and even commonplace, accepting same-sex sexual relationships seems a “plausible next step” (134).

Once the core elements of marriage are separated—the unitive and procreative purposes—the line of what counts as a marriage is easily erased and redrawn. What’s morally acceptable becomes whatever people are comfortable with, or whatever “two (or more) consenting adults” agree on. Once established, this relativistic view is difficult to uproot.

Six adults raised by two people of the same sex submittedamicus curiae briefs at the U.S. Supreme Court in support of man-woman marriage laws. I find the stories of these men and women compelling because they witness to the truth of the human heart: every person has an innate desire to know and be raised by their own mother and father. Children suffer when this does not happen, even if it is for a very good reason. We know this not only from these six people, but also from the experiences of adopted children, children of divorce, and children of artificial reproduction. These experiences and situations are not the same, but they do show us that whenever possible, children should be with their own mother and father in a stable, loving home.

The witness of these six adults and of others points to the deeper question: What is marriage? The only definition of marriage that upholds the dignity of the child is the union of a man and a woman—a union grounded in sexual difference and open to life. Even when the gift of children is not possible due to infertility or age, marriage does not lose its meaning.

Marriage in society is not about affirming adult romantic desires; it’s about bringing men and women together to become fathers and mothers of the next generation and recognizing the contribution that spousal love offers to society.

As a Sacrament, marriage is further about drawing men and women close to Christ in a mutual gift of self that mirrors and participates in His relationship with the Church.

*This article was originally published on www.foryourmarriage.org

Click here to read the USCCB statement from Archbishop Kurtz on the recent Supreme Court decision on marriage.