Who Are Christians in the Middle East? 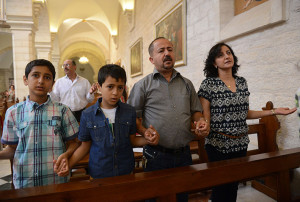 Seven Churches, each bearing a great and ancient history with unique liturgical traditions and culture, comprise the Catholic Church in the Middle East. Each of these Churches is in full communion with Rome, but six with an Eastern tradition are sui iuris, or self-governing, and have their own Patriarchs. All these Churches are Arabic-speaking and immersed in Arabic culture.

The Maronite Catholic Church is the largest of the Eastern Catholic Churches in the Middle East at around 3 million members. It has a strong presence in Lebanon, with smaller communities in Syria, Jordan, Cyprus, and the Holy Land. However, slightly over half its members have emigrated from the Middle East to countries such as Argentina, Brazil, Australia, Mexico, Canada, and the United States. The Maronite Church traces its origin back to a community formed around St. Maron, a 4th century monk who led an ascetic life. They were staunch defenders of the decrees of the Council of Chalcedon and thus received papal recognition in 518 A.D. There is a strong tradition among the Maronites that their Church never lacked communion with the Holy See since its formation in the 4th century. The Patriarch of Antioch of the Maronites resides in Bkerke, Lebanon.

The Roman Catholic Church (Latin Rite) holds a substantial presence in the Middle East, more than any other Catholic Church, at nearly 2.7 million members. However, almost 2.5 million of these Latin Catholics are migrant workers who come from countries like the Philippines, India, and Ethiopia to work mainly in the Arabian Peninsula and Kuwait. Of the remaining 200,000, the Latin Patriarchate of Jerusalem comprises the largest number of Latin Catholics at about 160,000. These Roman Catholic jurisdictions are not sui iuris like the Eastern Catholic Churches, but function like other dioceses of the Latin Rite.

On July 24 is the Feast Day of St. Sharbel Makhluf, first Maronite saint on the Latin rite calendar.

Born in a Lebanese mountain village, Youssef was drawn to the life 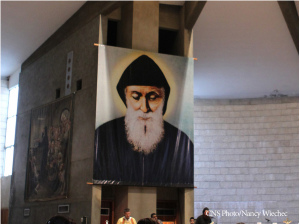 of his uncles, who were monks of the Maronite rite, but his peasant mother wanted her youngest child to work in the fields. At age 23, he left home for the monastery, taking the name Sharbel, after an early martyr. He was ordained a priest in 1859 and spent the next 16 years
in the monastery at Annaya, working, fasting, and praying. From 1875, he lived as a hermit, praying ceaselessly, regarded as a saint by those who knew him. He is the  rst Maronite saint included in the
Latin rite calendar.

This article was originally published on www.usccb.org.

Mass of Farewell for Bishop Henning

Blessing of the Home and Household on Epiphany