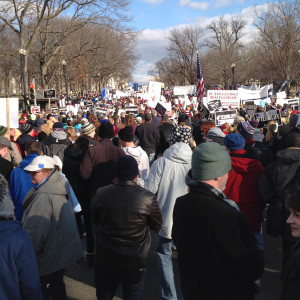 We’re all very proud of everyone from our diocese who traveled to Washington, DC to participate in the March for Life. We’re especially proud of all of our teens and young people who braved the weather to stand up for life in our capital. You can follow the March on Twitter #MarchforLife, on Facebook, photos can be viewed on the Respect Life Flickr page. Below are the recounts from two of the Office of Faith Formation Staff.

January 22, 2015: the temperature is over 40 degrees, the sun is shining, and I am marching. I can’t help but remember that when I was here a year ago, it was just above zero degrees in the bitter wake of a blizzard. I’m grateful for the small things, but my soul is not quiet. I have been marching annually for six years now, and though I walk coat-less through the streets of Washington, D.C., I know my pilgrimage isn’t over yet.

I am not alone; on this the 42nd anniversary of the Roe vs. Wade legislation—which made abortion at any point during a pregnancy legal in the United States—tens of thousands of protestors march alongside me, stalwart souls from the far reaches of our country joining together to stand up for our indelible right to the most basic of freedoms: life. We don’t know each other, but we exchange smiles and songs, lifting our signs high and proclaiming that we are proud of what we believe; that we will fight to defend it. Franciscan friars are leading “Hail Holy Queen” and a group of nuns are chanting in Latin. High-schoolers begin a rallying cry, while others are murmuring softly, eyes lifted to the heavens, rosary beads in hand. Unthinkably brave women stand at the steps of the Supreme Court, telling their stories in a powerful and personal witness that abortion harms more than a child: it hurts the women who suffer from it in profound and serious ways.

Despite this, we are full of joy. Our mood is prayerful, even somber at times, but we are saturated with hope. Our marching is not in vain; we know that coupled with the power of prayer and fearless witness, our throngs of believers will make a difference.

Many have speculated that this year’s March was the most populous to date. I attempted to Google this, and I wasn’t altogether surprised to find that no mainstream media has touted any such claim. The secular world is uncomfortable—even hostile—with our message: that every one of us deserves to live, that humanity is sacred and worth cherishing, and that an unborn child’s life is no less important than our own. These simple truths are twisted into a hateful message that we march to oppress women and deny our citizens the “freedom to choose.” What some fail to recognize is that the child in the womb—call it a fetus, an embryo, a conglomerate of cells; it’s still a child—has the right to choose as well! Since their voices can only be heard in the silence of our hearts, it is our duty as people—Catholic, Jew, Muslim, Christian, all creeds and nationalities—to protect them. Until the world embraces our youngest children and the sanctity of life for all, we will march, in ever-growing numbers and in the solidarity of our prayers and faith that one day we can foster change.

In the recent days I found myself reflecting on Martin Luther King, Jr. due to a new movie 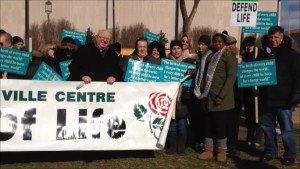 about his life and Martin Luther King, Jr. Day. I asked myself how much courage it would take to march for something you believe in like he did, knowing that by doing so some people would think you are crazy and that others wouldn’t understand, but you continued to march for what you believe in regardless. I felt fear thinking about how others would see me if I chose to march like he did and that fear was something I thought would be hard to overcome.

However, on January 22, 2015, I chose to march at the March for Life. I was excited and nervous

I still marched, taking comfort in knowing I was not alone, I looked to my right and saw marchers from Boston, Pittsburgh, Canada and from other places. I looked to my right and saw familiar faces, happy to be in attendance and chanting with me as we told others that this was our cause. I saw thousands of people and in the moment of seeing how many people were there, I finally got it. I marched with a hope and want to change the world I live in regardless of what others think. I believe that my march added with others would make a difference. I also know that God has given me life and a new day and I show care for others as God’s creations and joy for life by coming together to protect future life. In my opinion everyone who gathered, regardless of religion, was a beautiful sight not only to me but I believe it made God well pleased.