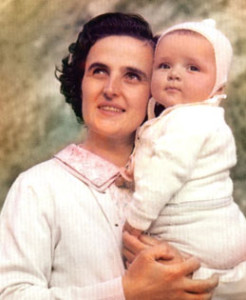 Saint John Paul II &  Saint Gianna are the official Patron Saints of the World Meeting of Families – Philadelphia 2015 for their deep commitment to strengthening and sustaining the family with great love.

In 1979, Saint John Paul II was the first pope to visit Philadelphia, where he said Mass on Logan Circle for nearly one million people filling the Benjamin Franklin Parkway. In 1994, he celebrated the first World Meeting of Families in Rome, which aimed to strengthen the sacred bonds of family across the globe. Upon his canonization, he was declared “the pope of the family.”

A pediatrician and mother of four, Saint Gianna is best known for her selfless love as a mother, giving her life to bear her fourth child in 1962. She was beatified by Saint John Paul II in 1994 and canonized in 2004. Saint Gianna is the Patron Saint for mothers, physicians and unborn children. Her life was a testament to “the family fully alive,” the theme for the World Meeting of Families – 2015.