Recounting of the March for Life 2014

It was a bone-chilling 7 degrees on Wednesday, January 22nd, 2014 and—as weathermen repeatedly spoke on radio and televised forecasts—the “real feel” was -14. The snow was falling in clumps and each roaring gust of wind made me believe I had been transported to Disney’s newest film, “Frozen.” The coldest winter of my lifetime had unleashed a record-breaking, virulent storm. And yet, despite that, I marched on Washington, and I was determined that nothing would stop me.

As a twenty-two year old, I am part of the Millennial generation, a collective group of post-adolescents infamously known for political indifference and moral relativism. Apathy and ambivalence seem to be our defining traits, and everything about who I am stands against that. I am a passionate Catholic and passionately pro-life. As such, representing my age group at this annual March was extremely important, to show the secular world and the media that being pro-life is no longer a “fringe” issue owned largely by stuffy upper-class octogenarians who are “out of touch.” The pro-life movement, especially as embodied on the March, is the cause of the rising youth.

But I wasn’t just representing Catholic young adults; I was representing our diocese. I knew that I could involve my passion for catechizing—as I always do– because, integrally, the movement transcends a day or two spent in our nation’s capital. The March has achieved nothing if we don’t take the truth with us when we leave. If all we ever do is stand on the steps of the Supreme Court brandishing signs, then we are missing the point. The only way to change laws is to first change hearts, one person at a time. And that takes real courage and real action.

This year was unique, as I was sponsored to attend the Students for Life conference in Glenarden, Maryland, on Tuesday the 21st. There 6,000 students and young adults gathered to educate one another, to celebrate life, and to share in camaraderie the importance of valuing the sanctity of our humanity. I was fed with strategies and methods for spreading the pro-life movement in my community, and I was encouraged to continue being a catechist for life. As one speaker put it, the key to changing minds about the evils of abortion is to ask questions and share stories, for it is only by personal witness and through understanding of each person’s unique perspective that we will advance our cause. We must use our tender hearts to soften hard hearts, and we must always do it in the name of Christ, who strengthens us.

Having seen now what the aftermath of abortion looks like—the damage left in its wake, and the death not only to the child but to the spirit of the mother—I have been galvanized in my desire to stop this horror. I can no longer bypass the graphic images, and I can no longer just smile at each photo of a cherubic infant resting on the words “Choose Life.” I can’t help but be both sickened and moved; I think of the millions of children taken from us. To call the abortion industry a genocide is not a stretch. Not one more woman should have to suffer and not one more child should have to be sacrificed.

So I march, and I will keep on marching, not just in Washington, D.C. on bitter winter afternoons where the air made our faces hurt (And after all, the joyful struggle and discomfort reminded me of the significance of my presence there). I will march in my heart everywhere I go, teaching with kind words, compassion, and an arsenal of scientific facts. I will teach by example, by promulgating the message of dignity and respect for all with every breath I take.

I was once told that we young adults are the “future” of the Church. The real truth is that we are the present, and that if we don’t stand up for life, then no one will. We are no longer the children looking to others for example, but those rising who must lead the rest of the world in this noble fight. I was so proud to be representing my diocese on that March, because I know that even I—just one person—make all the difference. 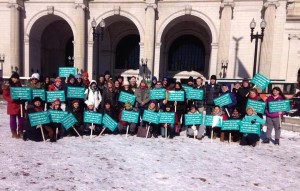 Another year, another March, and another snow blizzard. It always seems like the coldest day accompanies the March for Life. This year proved no exception. With record lows and snow on the way it was certainly an adventure to and from Washington, DC.

For my part I started out early on Tuesday morning. My train was due to arrive right as the worst of the storm was passing over DC. I wondered along the way if the train could withstand the storm. Luckily the train arrived in Union Station  safely, and I made my way to the National Basilica of the Immaculate Conception for the start of the Vigil for Life.

That evening Holy Mass was offered by His Eminence, Cardinal Sean O’Malley of the Archdiocese of Boston. Drawing on “The Emperor’s New Clothes” by Hans Christian Andersen, His Eminence reflected upon how the abortion issue has become the “new clothes” which so many citizens seem to blindly accept. In many ways the pro-life movement is the child who calls the “new clothes” of so called “women’s rights” rubbish. His Eminence’s message certainly set a fire in our hearts; a fire which hopefully would keep us warm for tomorrow.

The morning of the March was very cold. The snow has stopped, but the wind would not. No matter how many layers one had on the chill was felt. By noon, hundreds were flowing out of Masses and Youth Rallies across DC. Everyone was heading to the Mall for the start of the March.

Despite the blizzard there was an abundance of people filling the streets. If you looked back all you saw was a crowd of people. That is, if your vision was not blocked by the signs and banners. Walking the route this year seemed very fast to me. No doubt this was due to the freezing temperature. But there was a glow over the whole day. Rosaries were being said, friends were reuniting, people were cheering, all for life, all to give witness, all for Christ.

I believe that is what really fueled all of us. We have been caught in the great mystery of Christ’s love. This love calls us to stand against the injustice shown to the smallest citizen. This day is about bearing witness to the world. Yes, most media outlets will ignore the story. However, one must not forget the other aspect of this day. It is a Day of Prayer for the Legal Protection of Unborn Children. Braving the cold provided many of us with the opportunity to offer our pain as a sacrifice to our Lord. It is a time to pray for the strength to stand courageously even when we are not surrounded by thousands of people who agree with us. It is a time to pray for all those whose hearts need to change. “And I will give you a new heart, and put a new spirit within you: and I will take away the stony heart out of your flesh, and will give you a heart of flesh” – Ezekiel 36:26.