Congrats to our young Catholics Speaking Out for Religious Freedom 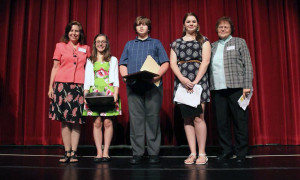 At the Rally for Religious Freedom: Our First Amendment Right on Saturday, June 29, Bishop Murphy concluded his remarks with these words:

Pope Paul VI reminded us many years ago that the world today needs teachers who are witnesses and witnesses who teach by their lives. … Today we are the witnesses. We will pray and we will speak. We will act together and invite others to join us. Our cause is a cause that is great and a truth that cannot be vanquished. Paul is right: For freedom Christ has made us free!  And we will never give up, never give in because we know: whether in chains or laurels religious freedom and liberty know nothing but victories! [Read Bishop Murphy’s entire keynote address here.] 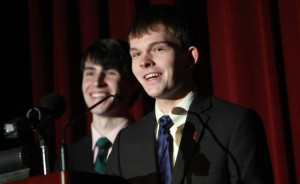 Photo by Gregory A. Shemitz (3VPhoto.com)

We want to congratulate our Catholic lay people and especially the young people who are setting such a wonderful and encouraging example in their public leadership and witness in defense of our religious freedom. In addition to Bishop Murphy’s keynote address, Richard J. J. Sullivan, Jr., C.I.C. of Babylon; Eileen Wolfe of Williston Park and Barbara Samuells of Dix Hills, both founding members of Catholics for Freedom of Religion represented the adult lay community, while William Clemens, Anthony Gullo, and Ivan Carballude, Student Officers of Chaminade High School’s Student Chapter of the Catholic League of Long Island, and Megan McCarthy of St. James Parish in Setauket, represented very well the young generation.

Megan shared the text of her talk at the rally with us, which we’re happy to share with all of you who couldn’t be there:

It may come as news to many people that our country’s right to religious freedom is being taken away. This may be because most people are not aware of the acts being done that are violating this right or they are ignorant of the rights they have. I, too, was unaware of what I was able to say or do in school or other public places regarding my faith. I didn’t know that, under our U.S. Constitution’s First Amendment right of Freedom of Religion, I was allowed to make references to God and my faith in school, mostly because there have been many instances where students and teachers were censored, threatened or actually punished for doing so.

One example of a violation against religious freedom took place at Atlantic University in Florida. A professor instructed his class to write “Jesus” on a piece of paper, throw it on the ground, and stomp on it. A student attending this class refused to do so and was punished. The university even defended the teacher’s lesson and encouraged him to continue teaching his students using that technique.

Another incident took place in Kountze, Texas when a high school cheer-leading team decided to use a verse from the bible on one of their banners to encourage and support their school’s football team. Soon after, an anti-religious advocacy group nearly 1,000 miles away from that high school complained and forced the school’s superintendent to ban all such religious speech on school grounds.

And in recent news, I am sure many people have heard about the student who decided to scrap his Valedictorian speech and say the Lord’s Prayer instead in protest to the school’s ban on any religious references in students’ speeches. That student is an inspiration to me and I am sure to many others with the same hopes of regaining our full rights to religious freedom. 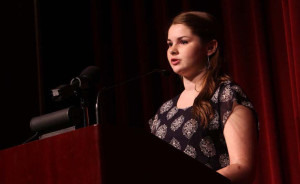 Photo by Gregory A. Shemitz (www.3VPhoto.com)

I know now that it is my constitutional right to be able not just to mention but to express my faith freely outside of my place of worship. We have all heard the phrase, “separation of church and state.” But, after many years of always being cautious of what I said involving my faith, I finally learned what it actually meant. Separation of church and state was never intended to hold us back from expressing our faith in our schools and other public places, but rather to insure that the government did not interfere with our right to practice or express our faith outside of our places of worship.

Although I am now aware of the correct meaning of separation of church and state, many people in current culture are not. As a 10th grader attending a public high school on Long Island, I recently finished learning about the Enlightenment that took place in Europe after the Renaissance. In history class, we were taught that the Enlightenment was a positive movement because it brought about unification among the people and an increase in the use of reason to develop policies and make decisions instead of basing them on medieval, “superstitious” beliefs.  But, what my teacher and my textbook failed to mention, was that these “superstitious beliefs” often included tenets of my Catholic faith and that this “Enlightenment” included the persecution and martyrdom of hundreds of thousands of Catholics, including priests, nuns and other religious throughout Europe.

The brave example of these people who gave their lives for their faith was the basis for the founding of our great nation, the United States of America, and why Freedom of Religion was the first right secured in our constitution and the one from which all our others were founded.

We the people of America must remember that this right of Religious Freedom was given to us by God and not by any government. Therefore, no government has the right to take it away from us or dictate when and how this right is exercised as long as it does not cause harm to the common good.

It is our duty to take the words taught to us as children and keep them true. “One nation, under God, indivisible, with liberty and justice for all.”

At this crucial time in our Nation’s history, it is my hope and prayer that God will continue to bless our country and give us all the courage, wisdom and strength to uphold, protect and preserve this precious gift of Religious Freedom for ourselves and all future generations to come.

Featured photo by Photo by Gregory A. Shemitz (www.3VPhoto.com)